so your baby grew out of his or her infant carrier? yippee! no more hauling a pile of lead around anymore (because we all can agree that those infant seats start to feel like they weigh about 100 lbs after the baby is a few months old)! so what now? which car seat is the BEST? i like to nerd out on car seats. actually not just car seats, any baby gear. if you want to talk stroller brands, swaddles and breast pumps, come sit by me! *warning, this post might get long because of my nerding-out capabilities*

okay anyway, first of all, every car seat on the market is safe. they all have to go through the same testing to pass off as a seat that's safe enough to protect your little one. having said that, there are seats that will rear-face longer in height and weight limit. some seats are better for fitting a few across the back seat (if you have 3 little kids and one back seat!) or give the person sitting in front of the seat more room, etc. and some companies like peg perego claim to be the very safest because of their safety standards that are higher than those provided by the government (more on this later).
luckily right now is one of the BEST times to buy a convertible car seat because amazon is doing one of their amazon moms appreciation events! this means if you sign up for an amazon mom account, you can use the single-use-only promo code BABY0513 to save 20% off any of the 286 products they're including in their event. if you don't have amazon moms and you are a mom, you should seriously consider it! you can sign up for a free trial to see if you like it and, if you get addicted like me, you can pay $79 for a year of prime/amazon mom where every prime order ships two-day free, and you can create subscribe and save orders and save 20% off things like diapers, household items, baby food, beauty products, cereal, etc. it's kind of like a costco membership, but better. (did i just say that?!?!!) you can see all of the qualifying products for the amazon moms event here.
anyway, back to the convertible car seat dilemma. let's start with britax because a) this is a mommy favorite, b) it's on sale right now as part of the amazon mom event!
BRITAX
the boulevard gives you side-impact protection, rear-faces up to 40 pounds and forward-faces up to 70 pounds. did you know your kid is FIVE TIMES safer rear-facing? also, the american academy of pediatrics states that your child should rear-face until AT LEAST two years of age. lots of parents now rear-face their children well beyond age two because, like i mentioned, they are five times safer when rear-facing. you can read more about this here. anyway, this is why that weight limit is so important! if your child has to forward-face sooner than you're ready to because of a weight restriction, you might regret your purchase. with the boulevard (or any of these seats i recommend, for that matter) you won't run into this problem.
the boulevard also has a no-thread harness system where if you need to change the height of the straps for your growing baby, you won't have to re-thread the harness. which i have never done but i've heard is a royal pain in the bum.
other standard features like the LATCH system, HUGS chest pads, base with safe-cell technology, and energy absorbing versa-tether are reasons why parents love and are super loyal to britax convertible seats.
it's already on sale on amazon for $228.45 but your price will drop to $182.76 with the amazon moms 20% off code. buy it here:

the britax pavilion is also part of the amazon moms sale, but the only difference between this and the boulevard is a “click & safe snug harness indicator” that basically makes a clicking sound when your harness is secured tightly enough around your child. i've read a lot of discussion online between moms about whether this is helpful and the general consensus is that it's really not. most moms find it kind of gimmicky and sometimes even a little annoying. so i'd say save yourself the money and go with the boulevard which will provide the exact same protection in the event of an accident as the pavilion. however, if you're like my friend aubrey and are in love with a print like the cowmooflage (cow print) or sophia (a cute pink print), now is the time to get this bad boy! buy it here:

the britax advocate is also part of the amazon moms event BUT i don't recommend this seat because it's HUGE. it has extra side padding *outside* of the car seat that does not protect the child at all, but is meant to pad/protect someone sitting next to the seat in the event of an accident. again, it doesn't protect the child in the seat at all. in my opinion, these extra pads are a waste of space and will take up way more room than necessary.
here's a nice little cheat sheet that will help you with the comparison of all the britax models 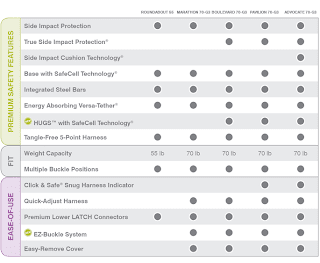 GRACO
the graco nautilus is another mom favorite car seat that's very budget friendly. it offers all the standard features you want in a convertible car seat like side impact protection and the LATCH system. it also converts into a booster seat and then a backless booster, when your child is ready for these transitions. one thing i don't love about it is that you need to wait until your baby is at least 20 pounds before you can start using this. but if your baby is already at that weight, and you need the best seat for the lowest price possible, this is definitely a great choice! it's $180 in tangerine or $178.23 in vice (black), and then you can stack the 20% off coupon code to bring it down to $142.58. buy it here:
Graco Nautilus Elite 3-in-1 Car Seat

PEG PEREGO
on to my favorite, the peg perego. i am kind of a car seat snob and here's why. i apparently have pretty bad luck and have been rear-ended three times in the past two years. no idea how i got so unlucky but it's just panned out that way! the most recent accident happened when my baby was just a few weeks old and although we didn't sustain any major injuries, i can tell you that panicky feeling you get after being in an accident is enough to make any parent willing to give up just about anything to know that their baby is in the safest car seat possible. when i was picking out an infant car seat, i did a lot and i mean a TON of research about the safest inant seat. hands-down, the reviews came back over and over that peg perego provided an overly-zealous safe seat. they use the most stringent side impact protection safety standards in the world. my friend kyley who is a nurse at primary children's medical center's ER (a local children's hospital) once told me that after asking the ER doctors she worked with, they all recommended peg perego as the best seat for protecting babies they saw come in from car accidents.
here's another reason i love peg perego. when we got in our most recent accident, my insurance said to me “if the car seat manufacturer you chose says that your seat needs to be replaced in an accident, then you can replace it and we'll cover the cost.” it depends on the car seat manufacturer's recommendation, NOT your insurance policy, on whether you can replace your seat in an accident. peg perego's policy states that in any accident, no matter how great or small the damage, they recommend replacing the seat. so we were able to get another infant seat, no questions asked, because that was peg perego's recommendation. maybe her seat was okay after that accident, but it made me feel better to get a new one just in case of a hairline fracture or anything that could have compromised the safety of the seat.
but we're talking convertible seats here right? right. so, when picking out a convertible seat, i ran across this review by thebabyguynyc (a former buybuybaby employee who has since turned into a hilarious yet extremely knowledgable baby gear guru) and his review sold me on peg's convertible seat. watch it here:
you can start with this seat basically from birth (5 pounds) and rear face all the way up to 45 pounds, which is one of the highest weight limits on the market for rear-facing.
here's a picture of our little one happily rear-facing in her peg perego convertible seat. she's only about 15 pounds right now but it's so convenient for us to have this seat in one car and her infant seat in the other, for now. 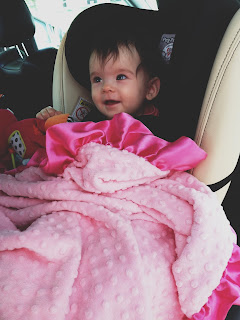 and a snapshot of her after she fell asleep in there. i love how her head doesn't hang forward in this seat when she does decide to take a little nap! 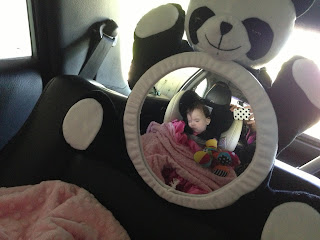 it also has some nice perks like not having to re-thread the harness and also the LATCH clips slide from rear to forward facing so you won't have to re-thread those either if you ever need to swap from rear to forward facing. it's extremely comfortable and has AMAZING reviews on amazon! we love love love this seat so much, and i think you will too if you choose this one!  it's pricey at $329 for the standard and $379 for the leather. but if you're going to get it i highly recommend amazon because they have an unbeatable return policy for baby items, and you won't pay tax in most states. that takes your price down right there versus buying it from another big box or even local store.
buy it here:
Peg Perego Convertible Premium Infant to Toddler Car Seat

the clek foonf is another seat that's a little more on the high-end but has amazing rear-facing longevity. the highest on the market, actually. thebabyguynyc reviewed this one too which you can watch here:
and you can buy it here:
Clek Foonf Convertible Car Seat

another hugely popular seat because of its magical capabilities to fit 3 across the back seat of any car is the diono radian. it's on sale for 20% off right now on amazon in a few different colors including shadow (a basic black) for $272.
buy it here:
Diono Radian RXT Convertible Car Seat

i hope this post helps some of you pick out the best seat for your family, your budget, your car, and your needs. if you have any questions at all please don't hesitate to leave a comment here, on facebook, or email me. i will try to get back to you as soon as possible! 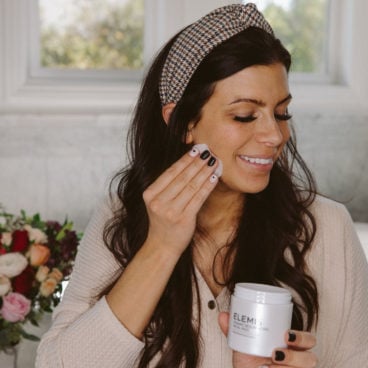 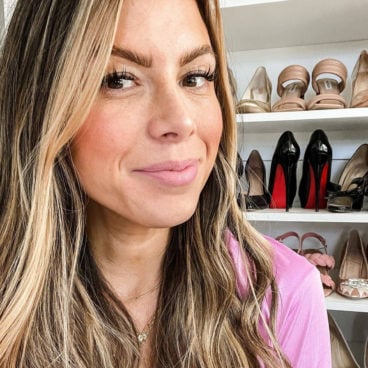